Another tigress imprisoned in a cage? – The infamous tigress still wandering through the jungles of Dudhwa?

A tiger / tigress has been visible to passers-by for almost two years east of the Dudhwa tiger reserve, no view of the timid nature of the tiger was seen in that tiger, other than that it stood in front of the cars without fear of the human race And feel free to walk along the railway line near Majhra train station or find it by taking a night walk along the road that runs parallel to the track … So don’t try to lose sight of it, but now the discussion of her beauty has become a matter of curiosity, is she now a criminal? He was called a human eater, his discussions are famous in general and special, some say a predator, some are thirsty for blood, the language of hunters is widely called in newspapers and communication channels, Jim Corbett said once The Tiger is a knight of great heart ….. the famous protector of wildlife and tiger Padma Bhushan Billy Arjan Singh had said that the tiger does not vote, so it is not heard under the government of Jamhooriyat , is only heard in humans. ..

Because now the life of the beautiful animal of this forest has been built, or it will be destined for life imprisonment or death in a zoo.

It is worth noting that the incidents of human deaths that took place in the Middle East, it is said that the footprints of the tigress have been found there, apparently this tiger captured from there is innocent, if it was sent to the zoo, then Dudhwa forest has a beautiful young tiger, which will increase the offspring of future tigers. 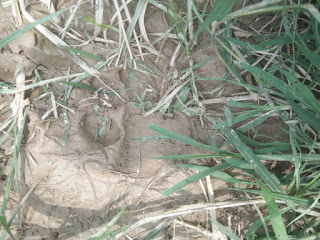 On June 26, a young man was killed by a tiger in Tapra No. 1 in the village of Teliyar, on the banks of the Ghaghra canal, his footprints clearly show that he is a tiger, which was also confirmed by Sanjay Pathak, Dudhwa field director, while the regional public denounced this human death, even the mazra covered the head of the eastern tigress and the media also …

It is also worth mentioning that to what extent it is appropriate to put the responsibility for 21 deaths on the head of a tigress or a tiger, it can be clarified from footprints and other scientific methods that only one tiger / tigress is guilty of these incidents. or Alahida Alahida.Tigre?

The political media talk about all human rights, they are not interested in dealing with these forests and tigers, if the tiger dies or the tiger kills someone, it is only news for them, only efforts to make them consider them anthropomorphic but they are not interested. in this No, if there are no tigers, then this forest will not survive, if there is no forest, then there will be no rain and no rain, no oxygen in the air, then what will it do? does this person do The tiger is the head of the forest ecology, if there is no tiger in the lowland forests, the balance of the forest ecology will be altered.

Another important point is the problems of the forest department and the revenue department around the forests of Dudhwa, the invasion of forest lands and man on the coast in the exploitation of forest wealth, the excess of human activities in the protected forest area, forests and roadsides along the roads Temporary settlements or shops on railway land … Motorcycles passing through the roads that cross the forest even at night, there are many reasons for this type that interfere with the lifestyle of wild animals.

The excess of sugar mills and the increase in the surface of the cane is also a great reason for the animal to reach the agricultural area, the sugar cane is an excellent meadow for the tiger where it is attracted to livestock. domesticated wild boar nilgai, due to which the conflict between humans and tigers. It is said that the continuous cultivation of sugar cane in the wetlands of the lowlands will one day turn the lowlands into deserts, the sugar cane depletes the groundwater level very quickly, about 20 years ago, a report in the WWF Panda newsletter. published under the title “Sugar cane is a thirsty crop.”

Well, whatever happens tonight, a tiger got stuck in the cage again, now two tigers in the cage, who is to blame for the forest department, it’s still not clear! Or are they both innocent?

Human beings must understand their responsibilities, we have been worshiping nature, from eternity, the goddess of the forest, the god of trees, the tiger, the vehicle of Durga, see Lord Ganesha in Hihi, every creature and tree is included in our system of worship, but in the culture of exploitation We have forgotten our traditional culture, we are left with only efforts.

Not only in the lowlands, these trees, these tigers, these birds, all living things, we are before humans, we came last and we destroyed the houses of these animals, that is, forests and farming villages. established … and even now we are doing all this constantly. Do you want to continue, overexploitation of natural wealth …

No one defends the tiger, the leader gets the vote of humans Democracy is a tribe of man where only the heads are counted … and we have also forgotten our constitutional and moral duty to nature, that is, the creatures of the jungle, the ponds of the rivers …. think