It is the month of Sawan and Kanwar Yatras are happening in different parts of North India. Saffron-clad kanwariyas will be seen anywhere on the roadside and in the streets wearing kanwars. Kanwar Yatra is in full swing. Due to the Corona epidemic, there was a huge impact on the Kanwar Yatra for 2 years. But this time millions of Kanwariyas are estimated to come for the Kanwar Yatra.

Many songs and videos are being made on this journey which has taken the form of a social festival. Local newspapers often make headlines about the anger and fury of the kanwariyas. Recently, during the Kanwar Yatra in Haridwar, Uttarakhand, the controversy over pulling the car forward became so deep that a kanwariya was killed. That Kanwariya was actually a jawan of the Jat regiment of the Indian Army.

Apart from all this, some carry the tricolor in the Kavad Yatra and some carry the photo of Babasaheb Ambedkar. Basically, religion, society, culture and politics have been mixed in the Kanwar Yatra. When many independent journalists and bahujans wanted to know the caste class of the Kanwariyas, they realized that most of the Kanwar Yatris are small farmers, farm labourers, unemployed and semi-employed youth.

Along with this, people from all castes are actively participating in the Kanwar Yatra. There are as many Dalits as upper castes. However, there is no data or evidence for this. The participation of Dalits in large numbers in the Kanwar Yatra is an important social phenomenon, but for what reasons does this happen? Let’s try to find out.

Why take a loan and go for Kavad Yatra?

“I earn living in Delhi. I got a call from my wife from home that we have to go to Babadham this time too. More than 30-35 percent of women in Tola go to Babadham ie Deoghar. From where the worker can bring money. , then take a loan of ₹ 6000. I have sent my wife. Every day the number of women from Tola is increasing, who go to Deoghar every year. Some men also come with them. 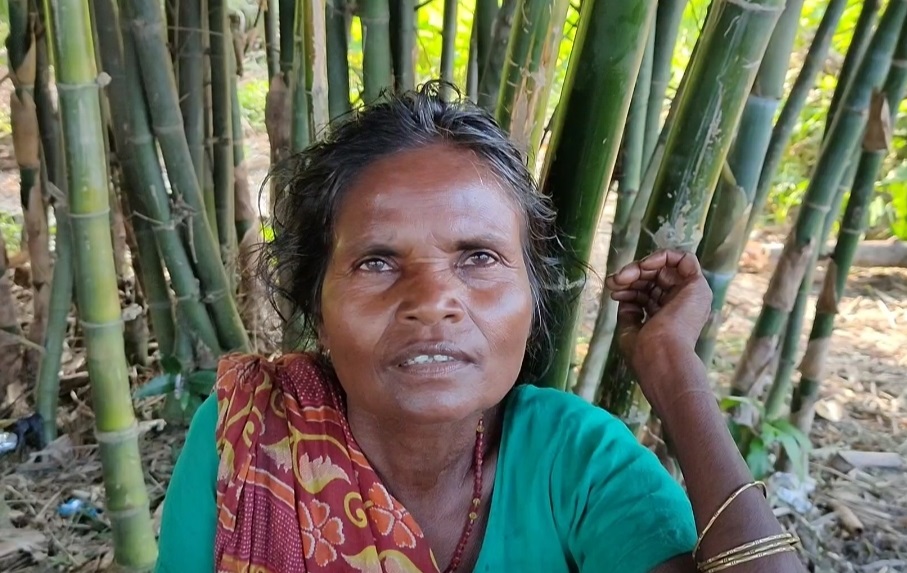 After talking to Saryu Rai, he talked to his wife Budhni. He had gone to Deoghar at the beginning of Sawan, which returned to the village after 6 days. Budhni says that: “When I go to work with the master, I see that the mistress worships a lot. Seeing all this, the faith in religion becomes stronger. Second, the village women did not go there at first . Now everyone’s husbands. . If you win outside, now…” Mistress allows Pooja to enter the house? Budhni starts laughing at this question. Saryu Rai and Budhni hail from the Musahar community.

Kalyaneshwar Jha (55) of Bhramarpur village in Bhagalpur district says, “Compared to the so-called older castes in the village, the younger castes DJ in the neighboring temples. We didn’t see this before. Only three groups used to going to Deoghar. Now the groups are getting bigger and bigger. Scooty, scorpi to bus van. The number of all this has increased since then they started winning going to Delhi and Punjab.” 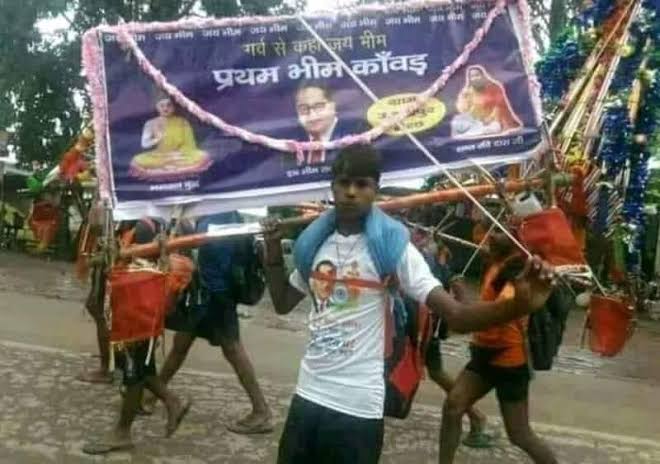 Even after 75 years of independence, the festival of religion, not bread, continues.

“Now in almost every village in Bihar two fairs are held. One is organized by the older caste and the other by the younger caste. In the name of social change, it has happened that in many places the community priest prevents the priest his caste and not of Brahmin.Still.The question remains why the community who fought for bread is fighting for Kavad Yatra and religion?Who are the people who have joined the Kanwar Yatra with photo of Ambedkar? That means 75 days of Independence Even after years, the festival of religion continues, not of bread That means Nand Dev Yadav, a former JNU student and leader of the Communist Party in the region from Kosi.

Most of the youth, lower castes and laborers working in handcart-khomcha are the standard bearers of the Kanwar Yatra.

Ram Paswan, a Dalit thinker, teacher and social worker from Bihar, explains, “Apart from riots and elections, these are the few occasions when people belonging to the middle and lower castes have a sense of being Hindu. The riot most famous in Bihar Find out which Caste was involved in Bhagalpur riots Where scientific approach should have been given attention to technological development There priority was given to divine law, incarnation rituals miraculous.As a result, the general public understands that this path of Kanwar is for their own good.

The boy Ram Paswan further explains that “A large number of devotees consume cannabis and ganja during the Kanwar Yatra. Some call it naive prasad and don’t know what. Only the study of Hindu scriptures can glean that from what has happened. 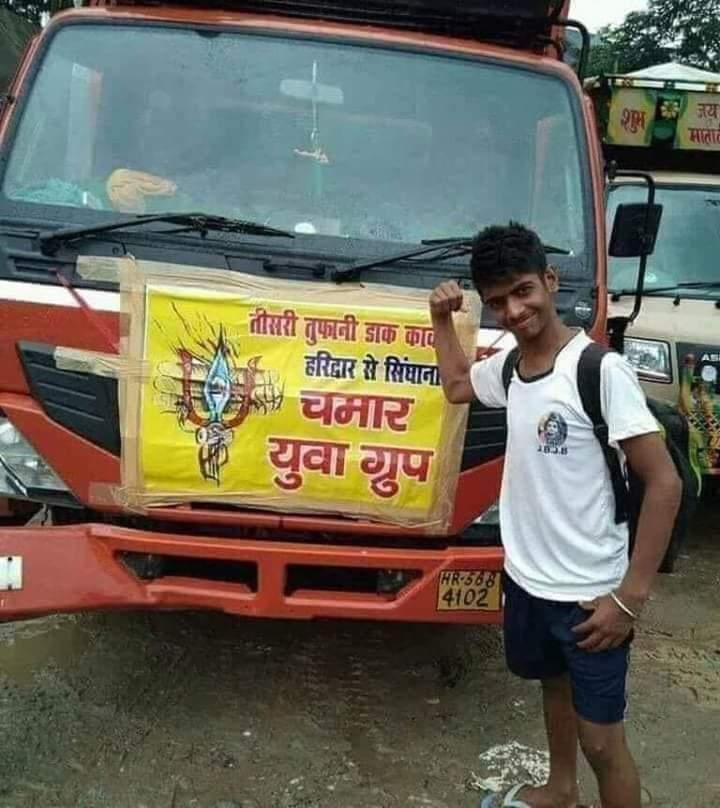 “Not only on Sawan, but also on Ramnavmi and Dussehra, we take out yatras and convoys to the village”

In Laud Panchayat of Supaul district of Bihar only two houses belong to Brahmins. The rest are Yadav, Kurmi, Sonar, Paswan and Dom caste people. Speaking of the year 2007 or 2009, this town was very backward from an economic and social point of view. Most of the people earned their living by working with the owners of the village or the neighboring village. Nowadays, i.e. in the month of Sawan and Bhado, the Kanwar Yatra leaves this village almost every week. Also, there is a temple of Kapileshwar Baba, about 9 kilometers away from the village, where Sonar and Paswan caste boys take out a convoy and worship with DJ.

Rahul Soni, who takes the lead in taking out the convoy with the DJ in the village, says, “Most of the youth in the village are associated with the Rashtriya Swayamsevak Sangh. Not only on Sawan, but also on Ramnavmi and Dussehra, we take out yatras and convoys to the village. Most of the youth go out to earn money at the age of 15-17, so we also collect donations from the boys. There is no interference from the village elders in this.”

Meanwhile, 25-year-old Ankit from the village works as a bouncer at a training center in Patna. He says that, “Before the situation in the village was different.. The young people are changing. The village is also developing compared to before. The children of the new generation are also studying. In addition, the village has tournaments.” In religious events and occasions, the convoy goes to the temple with the convoy, you understand that the period of change is happening in the village.

At the same time, Shankar Paswan, 48, of the village says that “Earlier 20 to 25 men from the village used to go to Kanwar Yatra. Now around 200 men would have gone. Who does not want to imitate the Barka caste. The new boys they win too.” That is why they direct their own will. In all this, the loss is to the poor people who go to the Kanwar Yatra even after taking loans by copying the neighbourhood.

Uttar Pradesh government has given the exact caste of those who died in Kanwar Yatra.

On July 22, 2022, an uncontrolled dumper trampled kanwariyas in Hathras district of Uttar Pradesh. Six kanwariyas were killed in the accident while two were seriously injured. A group of Kanwar pilgrims were going from Haridwar to Gwalior in Madhya Pradesh with Gangajal. It is worth mentioning that from all the Ganga Ghats in Uttar Pradesh-Uttarakhand, the kanwariyas go to the pagodas of their respective places with the holy Ganges water of the Ganges River. 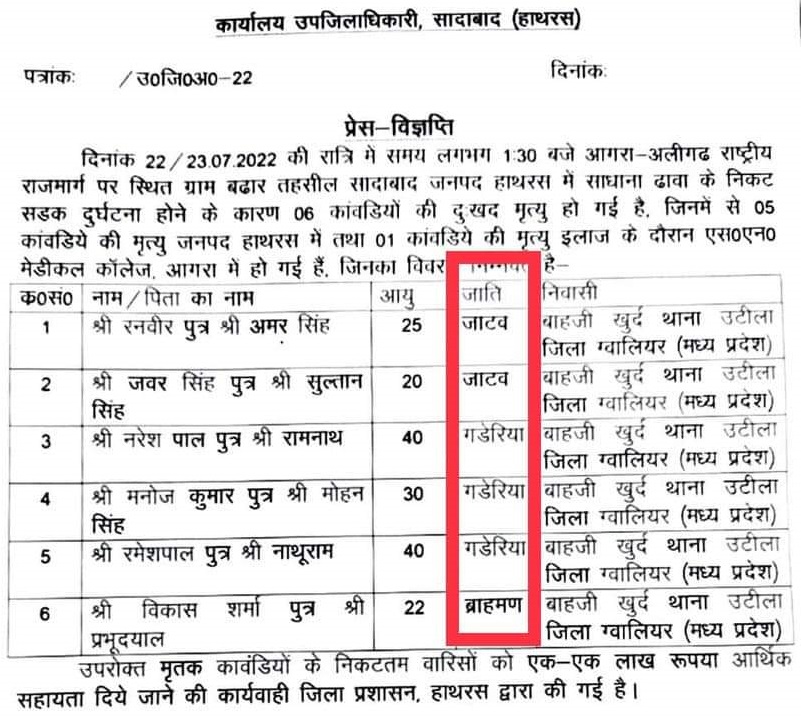 Satish Solanki, an outspoken social worker and village head of Bahujan Student Politics in Madhya Pradesh, says over the phone, “The Dalit caste is at the forefront of the most religious influence in Madhya Pradesh. Here, the Kanwar Yatra is done away with written.the names of their respective castes on the vehicle Now the government asks the soldiers for their caste.

As soon as the Kanwar Yatra starts, many videos start going viral on social media. In which comes a video in such a way that after making a father of 75 kg and mother of 65 kg, his modern son goes out to offer water. In this video the applause of the people and their praises in the name of religion begin.

Amit Chaudhary, student leader of Patna University explains that, “In today’s scientific age, when despite having so many means of transport available, how far is it right to take parents sitting in kanwar and take them to see Bhole Baba? Is Bhole Baba more? than this? Are you happy?”

Satish Solanki, an outspoken social worker and village head of Bahujan Student Politics in Madhya Pradesh, says, “Recently watch a viral video from Madhya Pradesh, the condition where the two elderly people are sitting in the box, how long can young people travel. sitting in this situation. In this way a large generation of young people in the country is being pushed into hypocrisy and darkness. If they have no money, then they should work hard, work hard, earn money by sweating and teach- them to the parents. with the money earned. This is being done out of greed to get him unnecessary respect.”

,The author is a freelance journalist. Thoughts are personal.,