Chandigarh University Viral Video: A new twist has come to light in the case of the viral video of around 60 girl students taking a bath at Chandigarh University in Mohali, Punjab. The talk of the accused girl and her boyfriend has come to the fore. In which the accused boy asked the girl to delete the contents, she said that she will delete everything at once and asked her to delete a folder. 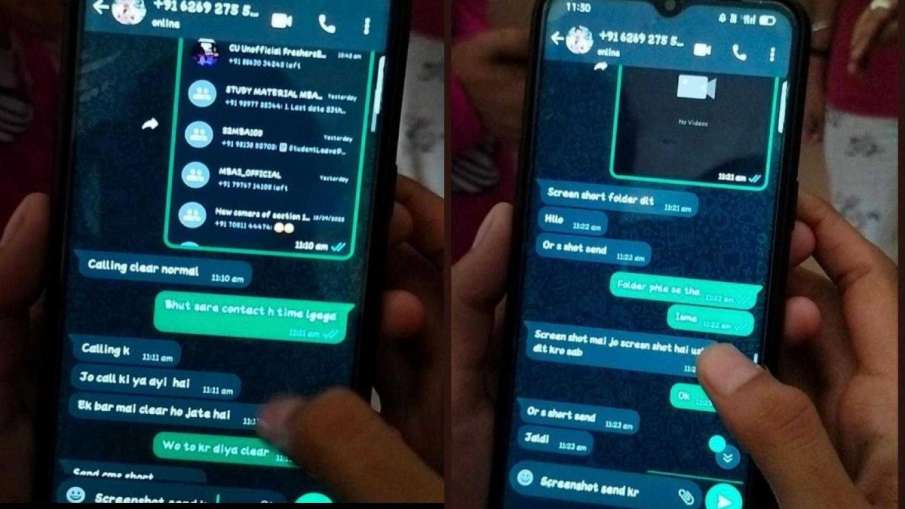 At the same time, the Punjab government has taken a strict stand on this issue. Punjab Chief Minister Bhagwant Mann has ordered a high-level inquiry into the matter. The Chief Minister tweeted, “Sad to hear about the Chandigarh University incident. Our daughters are our pride. Ordered a high-level inquiry into the incident. Strict action will be taken against those found guilty. I am constant contact with the administration. I am everything. of you.” I appeal to you to stop rumours.” Meanwhile, Chandigarh University Chancellor Satnam Singh Sandhu says the police are investigating the entire incident and we are helping them.

A man arrested for making a viral video

Meanwhile, according to the report, the accused student had sent the video of the female students taking a bath to a friend sitting in his Shimla, the youth uploaded the video on the Internet, after which the police to stop When the video went viral, there was a huge ruckus in the Chandigarh University campus and female students staged a massive protest in the hostel. The girls raised slogans of ‘We want justice’. During the protest, the police had to charge the students to disperse them.

Punjab Additional Director General of Police Gurpreet Dev told reporters that it appears the accused student shared a video of herself with the youth and no objectionable video of any other student has been found. University officials also dismissed as “false and baseless” reports that videos of several girls were taken in the college hostel and shared on social media and that several students committed suicide after the episode

Students demonstrated at the university

However, a large number of students protested again on Sunday evening at the university campus. Some of the protesting students accused the university authorities of “suppressing” the incident. Most of the protesters were dressed in black and chanted slogans like “we want justice” in the presence of the police. Mohali Senior Superintendent of Police Vivek Sheel Soni told reporters that the protest took place in the college after midnight following “rumours” that videos of several students were leaked. He assured that the cell phone of the arrested student has been confiscated for the forensic investigation and there has been no case of attempted suicide of the girl student and no one has died in this case. Officials said a case has been registered under Section 354C of the IPC and the Information Technology and Investigation Act is underway.

Strictest punishment will be meted out to all the guilty: Kejriwal

Delhi Chief Minister and Aam Aadmi Party (AAP) national convener Arvind Kejriwal said those involved in the case would face “the harshest punishment”. Kejriwal tweeted, “Victim daughters have courage. We are all with you. All act with restraint.

Punjab Women’s Commission Chairperson Manisha Gulati also reached the college campus and took stock of the situation. “I can understand the parents’ concern and I want to reassure them that the matter is being investigated by the police,” he said. Whether she recorded the video of other girls or not is a matter of investigation.

The National Commission for Women said in a statement that the body’s president, Rekha Sharma, has written to the director general of police, Punjab, asking him to immediately register an FIR in the matter and deal with the ‘matter without any negligence. The commission said that proper counseling should be given to the girl victims in the case and their safety should be ensured. The women’s rights body has also written to the Vice-Chancellor of Chandigarh University to take strict action against the culprits as per law and has asked the university to conduct a thorough investigation into the matter in an impartial manner .

Opposition leaders including Punjab Congress unit president Amarinder Singh Raja Wading, former chief minister Amarinder Singh, Shiromani Akali Dal leader and former Union minister Harsimrat Kaur Badal and the Congress leader Pratap Singh Bajwa has demanded strict punishment for the guilty. Badal said the government should make all the facts public and not try to suppress anything. Leader of Opposition in the state Bajwa said, “The Chandigarh University incident is distressing. The perpetrators of this crime must be dealt with severely and punished exemplary. If anyone forwards the video, we, as a society, we should inform the authorities and we stand with our sisters at this difficult time.”